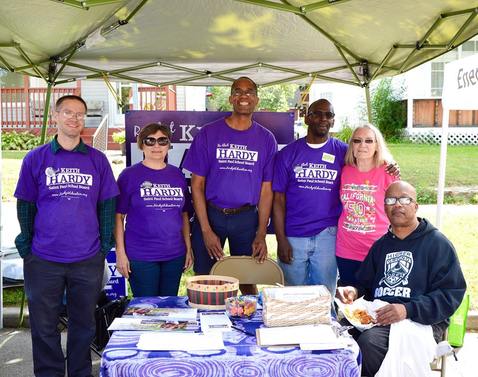 “It’s about the kids” has much to commend it. True, concerns about racial equity and racial inequality, evident in racial disparities, cutting across all institutions, relate to broad societal issues that touch all of us — white or person of color. So they touch schooling practices and policies. For some of us, speaking as an African American male, societal issues are central to how we navigate our lives. Societal issues and goals are not out-over-there but near and central. Such issues are about us in our day-to-day lives.

It’s not about “individualism.” It’s about relationship. Well-established educational research confirms that children who have the support of at least one adult at the school-site do better emotionally and academically than those who do not.
​
The district equity policy is paramount. Inequity distracts from achievement. District board candidates who share this understanding ought to be supported. Keith Hardy does! He’s about kids.

Okogyeamon (Herbert A. Perkins), St. Paul The writer was an educator and school board member in California.

While the Pioneer Press endorsed the Caucus for Change slate for the St. Paul School Board, you praised incumbent Keith Hardy, not in the caucus, for demonstrating willingness “to raise a lone voice in opposition to his colleagues” (“For St. Paul School Board,” Oct. 24). If the Caucus for Change slate sweeps the election, who will fill that role? You note that late in his term he less often stood in solitary opposition as “he found over time that there’s less to be gained from being contrary and more in ‘choosing when I need to be strident.’ ” So he is also willing to work with the board’s majority to form an effective governing team. Given that he is the only incumbent running who can bring institutional experience and knowledge to the new board, Hardy seems to have the attributes of an ideal candidate.

As the education ministry chair for Progressive Baptist Church, I have been attending the St. Paul School Board meetings for several years. I always watch how our elected officials vote. Keith Hardy always asks a question before he votes to make sure his vote helps the students first.

I have seen him talk to students, parents and teachers about what is going on in their school— not just at election time— but yearround! He asks the question, “How can I help as a School Board member? This is why I’m supporting Keith Hardy for School Board.

I’m supporting Keith Hardy for re-election for St. Paul School Board because Keith connects, listens, and acts.  I have observed Keith mentor adults and youth, tutor students in reading and math, visit schools on his days off, listen to parents and teachers, serve on nonprofit boards for youth, and annually attend the National School Board Conference, connecting with education leaders nationwide and advocating for our students with our legislators. He is a lifelong Democrat, active 27 years in St. Paul.  Keith is a strong and experienced leader, committed through action to the academic and life success of all our students.
​
Renee Bachler, West Side

In the School Board election on November 3, I will be voting for Keith Hardy. I became acquainted with Keith several years ago and have watched him closely. He is an exceptional person, a role model. Keith treats everyone with respect, encourages input, listens carefully and follows up on concerns. He holds himself to high standards and encourages others to keep raising the bar. His work on the school board reflects his passion for lifelong learning. He advocates for our students, especially for inclusion and academic rigor. During his time on the School Board he has visited every school multiple times. He frequently talks with students, parents and teachers to find out about their experiences and viewpoints. I encourage you to join me in voting for him.

I’m supporting Keith Hardy for reelection for St. Paul School board because I have witnessed Keith’s bountiful energy, motivation, conviction and actions for students.

Whether it be attending a robotics event, empowering young African American leaders, tutoring students to increase literacy and math skills, talking with parents or teachers, advocating for students with our legislators or visiting schools and classrooms on his days off, Keith is always up to something. That something is working for children, youth and their educational and leadership futures. He is a strong leader with extraordinary credentials and commitment. He has my vote.

As parents and grandparents of children in St. Paul public schools, we’ve watched over the past several years as our board has steadily put together a school system that increasingly supports our kids, especially those who have traditionally been underserved. For example, the board:
● Supported a referendum that gave our schools muchneeded funds.
● Approved racial equity and gender inclusion policies aimed at giving all our students fair treatment and a positive environment.
● Increased student and parent participation in board decisions, city-wide.
● Put world-class technology in the hands of every student.
​
St. Paulites will get to vote for four board members on Election Day, Nov. 3. We hope everyone makes it to the polls. For our part, we will be supporting incumbent Keith Hardy and other candidates who will maintain a laser focus on kids and the schools they need.

An important School Board election will be occurring in St. Paul on Nov. 3. The St. Paul district is in the midst of major demographic and institutional shifts, as well as budgetary challenges. I believe Keith Hardy is the strongest candidate on the ballot. Unlike any of the other candidates running, Keith has several years of experience on the board and currently serves as vice chair. Over the past several months, I have heard repeatedly from many students, parents, teachers and district employees that Keith is a constant presence in district schools and a strong listener. An African-American male who overcame significant odds as a young man to establish a successful career in information technology, Keith is an impressive role model for our students and has been an articulate advocate for much-needed initiatives to promote racial equity and break down systemic barriers within SPPS that contribute to the achievement gap in a district where almost 80 percent are students of color.

At this time of major change in our schools, it would not be helpful to have four inexperienced board members forming a majority. As St. Paul taxpayers, we should also be wary of the teacher’s union playing such an influential role in selecting the four DFL-endorsed non-incumbent candidates at the city convention and spending an unprecedented amount to influence the outcome, as has been documented in recent news reports. When the teachers’ union hand-picks the School Board, there is a real risk that the proper role of the board in balancing the interests and needs of students, system employees and taxpayers in making tough policy decisions will be affected as board members become wary of crossing the union. For all of these reasons, Keith Hardy is the progressive and independent voice that we need to stay on the St. Paul School Board.

On Sept. 17, the Minnesota Achievement Gap Committee and League of Women Voters held a St. Paul School Board candidate forum. And strikingly, at a forum on the achievement gap, only one of the seven candidates there was a person of color.

My son’s classmates in the St. Paul Public Schools are more than threequarters students of color, with more than 100 languages and dialects spoken. Particularly for a district that’s so diverse, we must all ensure that the opportunity for a great education is not limited by a student’s skin color or home language. Here are a few thoughts about how to achieve educational equity.
We surely don’t advance equity by firing Superintendent Silva in the middle of her contract, as one candidate suggested at the forum. Superintendent Valeria Silva, a Latina, has taken a leadership stand and introduced the open discussion of institutional racism and clear evidence of its impacts on student achievement— a long-overdue focus. She and the current School Board introduced a racial equity policy in 2013 and a comprehensive implementation plan to eliminate the racial predictability of achievement in the district.

We surely don’t advance equity by denying support to the board’s most visible leader on equity issues— Keith Hardy, the only African-American on the School Board. But that’s exactly what a small and self-empowered group of DFLers did this spring at the endorsing convention. As a former DFL chair, I watched this turn into the worst sort of political charade. It opened and profoundly deepened wounds across St. Paul, owing particularly to the specially hired organizing power in the political arm of the St. Paul teachers’ union.

No, we surely don’t advance equity by silencing the voices of key leaders of color. Rather, the path toward equity must begin with ensuring leaders of color have the stable backing to speak forthrightly, even when that challenges us to rethink existing norms. If we want equity as an end product of our shared efforts, then equity and strong leadership from people of color must be a part of what we do in the beginning. We advance equity by seeking out and embracing diverse voices as district leaders, classroom teachers and as parent leaders with a stake in their children’s and community’s future. We further equity by doing the hard work of respectfully learning about, building on and refining our entire community’s approach toward equity.
​
So if we are truly interested in educational equity for all our children, we each have a special responsibility to support the wisdom and insight of seasoned leaders of color like School Board Member Keith Hardy. Your support for educational equity begins with how you vote in November’s election.